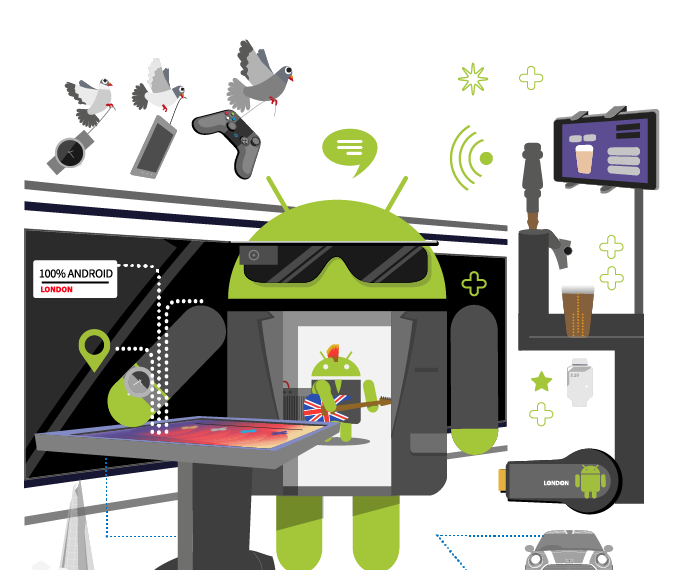 Last week we attended Droidcon London, the biggest Android convention in the UK. Droidcon brings far-reaching new technologies and concepts, and presents a wave of exciting innovation in the Android world.This post is a sum of the most recurring topics at the convention, and the most innovative technologies presented there.

Popular subjects this year included wearable technologies, application security and ways to speed up the build process. Android Wear was a hot topic, and developers were encouraged to look ahead to a future beyond the smartphone, when devices such as smartwatches become the norm. Crafting design to make better user experiences was also a recurring theme.

In the innovation section, Eye Tribe presented their new eye tracking technology: a combination of an eye tracker with a new EyeProof analytics platform. This technology can record eye movement patterns from users all around the world, so that it is possible to know exactly what is seen or not seen. You can find out more here.

Another interesting concept in this section was Flyver, a framework and marketplace for developers to build, publish and monetize drone apps. You can find some examples of drone apps here.

Mapsum, a company that aims at creating location smart apps, was also present at the convention. Touchpoint, one of Mapsum’s new feature, allows retailers to message their own customers when they are near their store, monitor competitor stores and make use of in-store location technology such as iBeacons and NFC. Mapsum also developed Tagd, a product which allows organisations to create their own digital treasure trails and information trails. More information on their website.

A few smartglasses were also presented at Droidcon this year. Notably with Epson’s Moverio BT-200 and Sony’s SmartEyeglass.